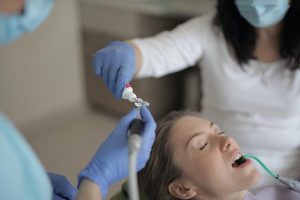 According to the American Dental Association, the average 2020 income for general dentists in private practice was $170,160. This is more than twice the approximately $69,000 cited by the Census Bureau as median income for US households in 2019, meaning that general dentists in private practice can make an excellent living. The $170,160 figure was for general dentistry, so practitioners in specialized areas can expect to make more on average than even this already quite respectable sum. Since this is only the average income, the top dentists or those in higher cost-of-living areas can expect to see even higher incomes as well.

The salary outlook for dentists has been steadily rising over the past decade and the highest-paid 25 percent of dentists in 2019 made over $200,000 per year. At a time when many people in the United States and around the world are facing financial difficulties and employment insecurity, dentistry can provide a high and stable income, leading to financial security for dentists and their families.

Bureau of Labor Statistics projections for 2018 through 2028 predict a rate of 7% job growth for dentists, which is higher than the average for all jobs. The reasons for this projected job growth are attributed to the increased demand for dental services by an aging US population. Thus, in addition to being a highly compensated career field, dentistry is also a stable occupation with job openings predicted to continue to grow. Dentists will not need to worry about their jobs being downsized, replaced, or outsourced. As the population continues to grow and to grow older, people will continue to need care for their dental health.

Statistics from the Economic Research Institute indicate that dentist salaries are likely to increase by 16% over the next five years, rising to a projected average of $222,703 in 2026. Tied in with the previous statistic, this salary growth is connected with the likely increase in demand for dental services as the population grows and ages, increasing the number of people who need dental care and the length of time for which they will need it. Relatedly, the level of complexity of the dental care needed by this aging population is also projected to increase, which will likely increase the compensation rates that dentists performing this increasingly complex, difficult, and time-consuming work can earn. Dentistry, already a high-paying career in 2021, will have an average income of nearly a quarter million dollars per year by the year 2026.

According to 2020 statistics of the American Dental Association, specialty dentists earned average annual incomes ranging from a low end of $227,120 for pediatric dentists all the way up to $407,550 for oral surgeons. These specialty occupations within the wider field offer a chance for dentists to both concentrate in an area they find most interesting or best suited to their personal skills and simultaneously to earn a sizable salary. Even the lowest paid of the surveyed specialties had average annual earnings exceeding a quarter million dollars per year. Since these numbers are averages, it should be noted that the top specialists in their field can expect to earn significantly more than this. By going into one of several specialized subfields of dentistry, a dentist can dramatically increase their income.

According to Bureau of Labor Statistics information, the lowest paid 10% of dentists earned a salary of $81,060 in 2020, which is still more than twice the median annual income in the United States. Thus, even the worst possible economic situation for a dentist would be better than twice the median salary of the average American. Even starting out in the field before gaining experience and distinguishing oneself, the lowest salary a dentist can expect to earn should more than meet the needs of a young professional, ensuring economic security for dental professionals.

The median net income of dental school graduates in their first year of employment was around $150,000. This salary is incredibly solid for a professional just starting out in their field and is among the highest paid of professions according to NerdWallet. A dentist will have studied for years by the time they begin to practice, so this excellent salary is a nice reward for all that hard work. Combined with the stable and increasing demand for employment within the field, this starting salary information should provide peace of mind for newly-graduated dentists.

According to an analysis of 2019 data published in May 2021, dentists who owned their own practice earned an average of around $222,000 net income. For those dentists who also consider themselves to have some business savvy and entrepreneurial spirit, owning their own practice can be particularly lucrative, bringing their income after expenses to nearly on par with some pediatric specialty dentists. This could be a good option for a dentist who would like to branch out on their own and enjoy both greater independence and greater compensation. For those willing to take the risk, the rewards in the form of higher salary and being one’s own boss might just be worth it.

If you are ready to take the next step reach out to one of our dental practice management consultants.  2740 Consulting offers the best dental consultants